HTC-ROTC PRESENTATION OF CORPS OF SPONSORS AND ESCORTS 2012 The program with the theme, “ROTC: Preparing the youth to become better citizens and future leaders of the Armed Forces of the Philippines”, was also actively participated by its Acting Commandant Col. Pablo L. Liwan Jr. INF (GSC) PA and by the Chairman of the Board and ROTC Coordinator, Atty. Josemar T. Albano, who was the guest of honor and speaker for the said activity.

The program started with the presentation of the troops which was followed by the manual of arms and later on, the officers center march. Thereafter, Atty. Josemar Albano, along with the acting commandant and the battalion commander inspected the battalion by trooping the line as the officers and cadets gave honor to the guest speaker.

The presentation of sponsors followed as the beautiful sponsors and handsome escorts parade in the field and proudly accepted the responsibility that was assigned to them. The cadet officers presented their respective sponsors and escorts to the spectators and thanked them with a bouquet of flowers and sash. Professor Caryl Jane Blasabas was also appointed as the Dean of Sponsors to which she heartily and proudly accepted. In addition, Ms. Michelle Ria Dupalco, also accepted her responsibility as the muse for this school year’s sponsors.

The guest of honor and speaker, Atty. Josemar T. Albano, gave an inspirational message particularly on the role of the sponsors and escorts. Atty. Albano emphasized that since sponsors and escorts are the link that binds the cadet officers and non-officers, their roles should not only be for one day but all throughout the year. Thus, the guest speaker encouraged them to participate actively in socio-economic and political activities, including environmental events to promote the true spirit of camaraderie and esprit de corps. He also challenged the Dean of the Sponsors to create activities that would enable the sponsors and escorts, as well as the ROTC cadets, to further develop their skills not only in marksmanship but also in first aid treatment. As the ROTC theme, the cadets, including the sponsors and escorts, should become better citizens and leaders of the society.

The first part of the program ended with high spirit and morale for the cadet officers and non-officers. The second part of the program was the confirmation of rank and induction of officers which was held at Jam’s Resto Bar, Brgy. San Isidro, General Santos City at 7:00 o’clock in the evening on the same date. The HTC President, Rey T. Albano, MaEd, was the guest of honor and speaker for the said event. 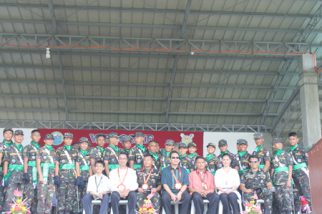