The President’s State of the School Address (SOSA) 2014 The atmosphere that day befits a remarkable event. For the Trinitarians who flocked the Lagao Gymnasium on August 15, 2014, the day was extraordinary. It ushered in the Holy Trinity College’s 30th year. The Trinitarians were to witness an institutional milestone.

On that day, Prof. Rey T. Albano, HTC President, delivered his 6th State of the School Address (SOSA) before his academic community and distinguished guests that included its Board of Trustees, representatives from the Commission on Higher Education and a host of friends from partner institutions.

More than the speech that the SOSA came to symbolize, it was also a well-thought out event, one that showcased a pool of talents within in an event that gave credence to what the HTC has achieved as an institution.

The HTC celebrates its 30th this year, and as in the years past, the SOSA spoke of many things. The 2014 SOSA was a renewal of the President’s commitment towards its green advocacy, a commitment to embrace change, and “to break barriers in order to conquer.” The theme “Green [email protected]: Breaking Barriers to Conquer” takes after the themes of the years past, with emphasis on breaking new grounds, in a deliberate attempt to chart the institution’s directions towards a future that while still emerging,  needs to be welcomed as an opportunity for the institution and its community to soar even greater heights.

Prof. Albano’s speech also articulated his renewed commitment to the four pillars around which his leadership operates.

He spoke of the many institutional achievements in the fields of academics, culture and sports which reflect quality and excellence, the first of the four pillars.

The HTC recognizes the critical role it plays as a higher education institution with a mission not only to fulfill its mandate but also to contribute to the welfare of a wider community of which it is a part.

HTC’s involvement in various community-led undertakings, as well as the other HTC-led initiatives for the community reflects its continuing commitment to remain relevant and responsive, an acknowledgement of HTC’s role in the wider scheme of things.

He acknowledged the role of education in improving people’s lives, and the importance of providing socially-inclusive learning environments, and equitable access to learning opportunities where a significant segment of the community can benefit from.

He credited the campaign strategy of Guidance Office Director Joy de Castro, Guidance Counselor Ms. Vangie Galino and PESO Manager, Gay Claudio for the significant 9.5% increase in enrollment from 5,432 in the previous school year to 5, 947 this school year.

Speaking on the last of the four pillars, he said, “effectiveness often dictates an institution’s reputation and efficiency increases productivity,” and proudly highlighted institutional milestones that reflected the tenets of the last pillar.

He then spoke of the way forward, as the HTC continues to brace itself pro-actively to incoming challenges and changes in the educational landscape.

In anticipation of these changes, the President tasked Prof. Marcelino Tayamen, HTC Quality Assurance Manager and a certified CHEd Quality Assurance Assessor, to work out plans for the institution’s classification as a professional institution (horizontal typology) towards a vertical typology of autonomous status.

He also counted on Dr. Giovanna Abecia and Prof. Lilibeth Roa to prepare HTC’s Roadmap for the K-12 program on 3 Tracks: the Sports, Tech-vocational and Academic tracks which the school intends to offer by 2016.

He said HTC is now gearing up towards maintaining its accreditation status and will pursue accreditation activities within the school year for the following programs:

The HTC will also continue to forge meaningful collaborations and partnerships with both local, national and international institutions.

Prof. Albano underscored that the welfare of the HTC community remains a top priority, and this translates to  investments in retirement, health and housing, including salary upgrades.

There will also be further enhancements of existing school facilities and infrastructures, and construction of new ones to accommodate HTC’s growing population and demands.

The HTC will continue to have its programs accredited and will pursue systems upgrades and periodic systems assessment in order to enhance HTC’s programs and address the needs of its customers.

In conclusion, he said “like any birthday,” he said, “a true celebration is a celebration of thanksgiving for a journey well tread.” As the HTC looks back to its achievements, it is also looking and moving forward to its 30th year celebration this November. He enjoined his community “to continue giving themselves and to continue sharing the Good Holy experience” as it embarks on a new journey towards a “green HTC, towards breaking barriers in order to conquer so that others may learn, and so that life will be better.” 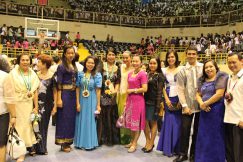